Resurrecting the legacy of a man who understood, and feared, the future of automation.
Doug Hill Jun 11 2014, 3:48 PM ET
Published in ATLANTIC MONTHLY MAGAZINE, JUNE 2014

I’ve been preoccupied lately with thoughts of marauding broomsticks, genies in bottles, and monkey’s paws.

All are literary images the scientist Norbert Wiener used to make the point that we fool ourselves if we think we have our technologies firmly under control. That Wiener was instrumental in creating the technologies he warned about demonstrates the insistent obstinance of his peculiar genius.

The images came from, respectively, Goethe’s poem, “The Sorcerer’s Apprentice,” the “Fisherman and the Genie” fable in One Thousand and One Nights, and W.W. Jacobs’ short story, “The Monkey’s Paw,” in which a magical talisman gives an elderly couple more magic than they bargained for. The common theme is unexpected consequences, specifically the often tragic ones that can overtake us when we seek to exploit mechanisms of superhuman power. “The world of the future will be an ever more demanding struggle against the limitations of our intelligence,” Wiener wrote in 1964, “not a comfortable hammock in which we can lie down to be waited upon by our robot slaves.”

Wiener is best known as the inventor of “cybernetics,” a fertile combination of mathematics and engineering that paved the way for modern automation and inspired innovation in a host of other fields. He was also one of the first theorists to identify information as the lingua franca of organisms as well as machines, a shared language capable of crossing the boundaries between them.

Wiener was 69 when he died of a heart attack in 1964. He’s come to mind recently because a conference dedicated to reclaiming his reputation is scheduled in Boston later this month. Sponsored by the Institute of Electrical and Electronics Engineers (IEEE), Norbert Wiener in the 21st Century will feature a series of papers and panels demonstrating not only that Wiener was ahead of his time, but that now his time has finally come. Indeed, engineers who are well grounded in cybernetic theory will tell you technology is just catching up with ideas Wiener proposed more than half a century ago.

“Those who suffer from a power complex find the mechanization of man
a simple way to realize their ambitions.”

It might seem odd that Wiener’s reputation would need reclaiming, considering the immense impact he achieved in his lifetime. As a child he was widely acclaimed (and sometimes ridiculed) as a prodigy; he earned his undergraduate degree from Tufts at the age of 14, and his doctorate from Harvard when he was 18. As an adult he became one of the most famous scientists in the world. His books were best sellers, his opinions regularly featured in national magazines. The anthropologist Gregory Bateson and his wife, Margaret Mead, were among those enthralled by Wiener’s presentations at the intellectual all-star games known as the Macy Conferences. “I think that cybernetics is the biggest bite out of the fruit of the Tree of Knowledge that mankind has taken in the past 2,000 years,” Bateson declared, according to Wiener’s biographers Flo Conway and Jim Siegelman.

Yet, much sooner and more thoroughly than could have been expected, memory of Wiener and of his contributions faded. Several reasons account for his eclipse. One is that during the height of his career, Wiener refused, for ethical reasons, to accept research contracts from the military or from corporations seeking to exploit his ideas. Since the military and corporations were the main sources of research support, Wiener’s defiance hindered his progress during a period of unprecedented technological advance. Besides nuclear weapons, Wiener was perhaps most worried about the technology he was most directly responsible for developing: automation. Sooner than most, he recognized how businesses could use it at the expense of labor, and how eager they were to do so. “Those who suffer from a power complex,” he wrote in 1950, “find the mechanization of man a simple way to realize their ambitions.”

Wiener’s personality, too, contributed to his marginalization. Psychologically scarred by his father’s brutal attempts to mold and promote him as a prodigy, he was the quintessential outsider. His social ineptitude was notorious. He would snore sonorously through academic meetings and enthusiastically pick his nose while delivering lectures. His colleagues at MIT developed evasive strategies to avoid being buttonholed by Wiener in the hallways; his interminable monologues typically began with the question, “Am I slipping?”

Conway and Siegelman suggest that Wiener was excluded from the team of scientists chosen for the Manhattan Project because no one believed he could be trusted to keep its secrets. Conway and Siegelman also describe a messy personal misunderstanding that caused Wiener to abruptly sever a research collaboration that might have secured his standing in the scientific community once and for all.

The most direct reason for Wiener’s fall to relative obscurity was the breakthrough of a young mathematician and engineer named Claude Shannon. Working roughly in parallel with Wiener’s development of cybernetics, Shannon wrote two papers—a 1937 master’s thesis on the application of electrical relay circuits to problems of Boolean logic and a 1948 journal article on communications—that together blew the theoretical doors wide open for the computer era.
Shannon is celebrated today as the father of “information theory,” and thus the progenitor of the digital revolution. Wiener approached information from a different angle—analog rather than binary, continuous rather than discrete—although there was significant overlap, as both men acknowledged. Shannon, however, remained resolutely focused on electronic communications, whereas Wiener envisioned cybernetics as a bridge across the “no-man’s lands” of science, chief among them the boundaries between engineering and biology. The subtitle of his book Cybernetics— “control and communication in the animal and the machine”—spoke to that ambition.

As exciting as cybernetics was philosophically, Shannon’s more conservative theory proved to be more immediately exploitable. Any number of Silicon Valley millionaires and billionaires can attest to that. Who gets the lion’s share of the credit for information theory depends on who’s talking. Conway and Siegelman emphasize the many hours Shannon spent picking Wiener’s brain at MIT. In “The Information,” James Gleick portrays Wiener as jealous of the attention Shannon received and determined to stake his claim as information theory’s co-creator. There’s likely truth to both characterizations. Conway and Siegelman describe Shannon’s and Wiener’s theories as “sister” sciences, and add: “In the end, both men deserved, and received, credit for contributing two complementary concepts of information to the postwar world.”

A lot of the talk at the Wiener conference in Boston this month will be centered on the conviction that Wiener’s approach to information theory is finally coming into its own. Science and engineering are bursting today with examples of the sorts of convergences Wiener championed. The Maker movement and the Internet of Things represent the early stages of recognizing the increasingly fluid crossing of boundaries between hardware and software. (O’Reilly Media’s first “Solid” conference last month was dedicated to the tech community’s excitement over that burgeoning fluidity.) At the same time, cross-disciplinary advances in everything from robotics and prosthetics to synthetic biology and neurology are affirming the validity of Wiener’s vision.

The complete synthesis of humans and machines predicted by the transhumanists could represent the vindication of cybernetics—as well as Wiener’s ultimate nightmare. His fears for the future stemmed from two fundamental convictions: We humans can’t resist selfishly misusing the powers our machines give us, to the detriment of our fellow humans and the planet; and there’s a good chance we couldn’t control our machines even if we wanted to, because they already move too fast and because increasingly we’re building them to make decisions on their own. To believe otherwise, Wiener repeatedly warned, represents a dangerous, potentially fatal, lack of humility.

As he put it in his last book, God and Golem, Inc.:

Of the devoted priests of power, there are many who regard with impatience the limitations of mankind, and in particular the limitations consisting in man’s undependability and unpredictability….To this sort of sorcerer, not only the doctrines of the Church give a warning but the accumulated common sense of humanity, as accumulated in legends, in myths, and in the writings of the conscious literary man. All of these insist that not only is sorcery a sin leading to Hell but it is a personal peril in this life. It is a two-edged sword, and sooner or later it will cut you deep. 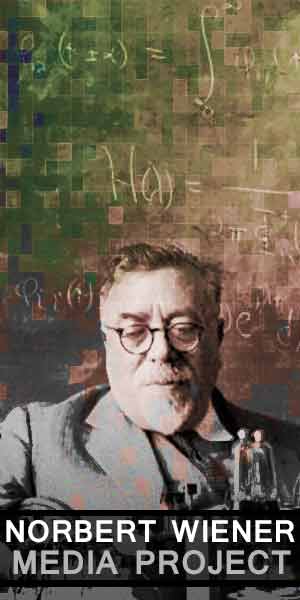